In December of 2017, Trump had just proclaimed that Bear’s Ears Monument would be drastically reduced in size. This struck me at the time as having no apparent purpose. Perhaps Trump thought that he was enabling uranium mining operations to expand, or that he gained something by directly threatening to despoil the land held sacred by many indigenous people.

Probably the real reason is something simpler and more obvious. He just wanted to spite Obama and show the former President that he was now boss. Even so, we should not overlook such a deliberate provocation and direct attack on sacred lands. On the contrary, we should make a reasoned case to re-instate the full size of Bear’s Ears National Monument. Not only the 1.3 million acres that Obama sought to protect, but the entire area, all 1.9 million acres that were defined in the original proposal.

Let us review the case.

President Barack Obama had been petitioned in a joint effort of five Native American Nations to establish federal protection over the Bear’s Ears lands. In the petition, a partnership of the Native American governments defined 1.9 million acres of land that encompassed many thousands of archeological and culturally significant sites. (1) Obama’s Proclamation of Dec 28th, 2016 (#9558) was made under the auspices of the Antiquities Act, and decreed an area of 1.35 million acres to be established as the Bear’s Ears National Monument. (2) Not only was this a great decision for protecting sacred sites, but it was a milestone for conserving our wilderness ecosystems. 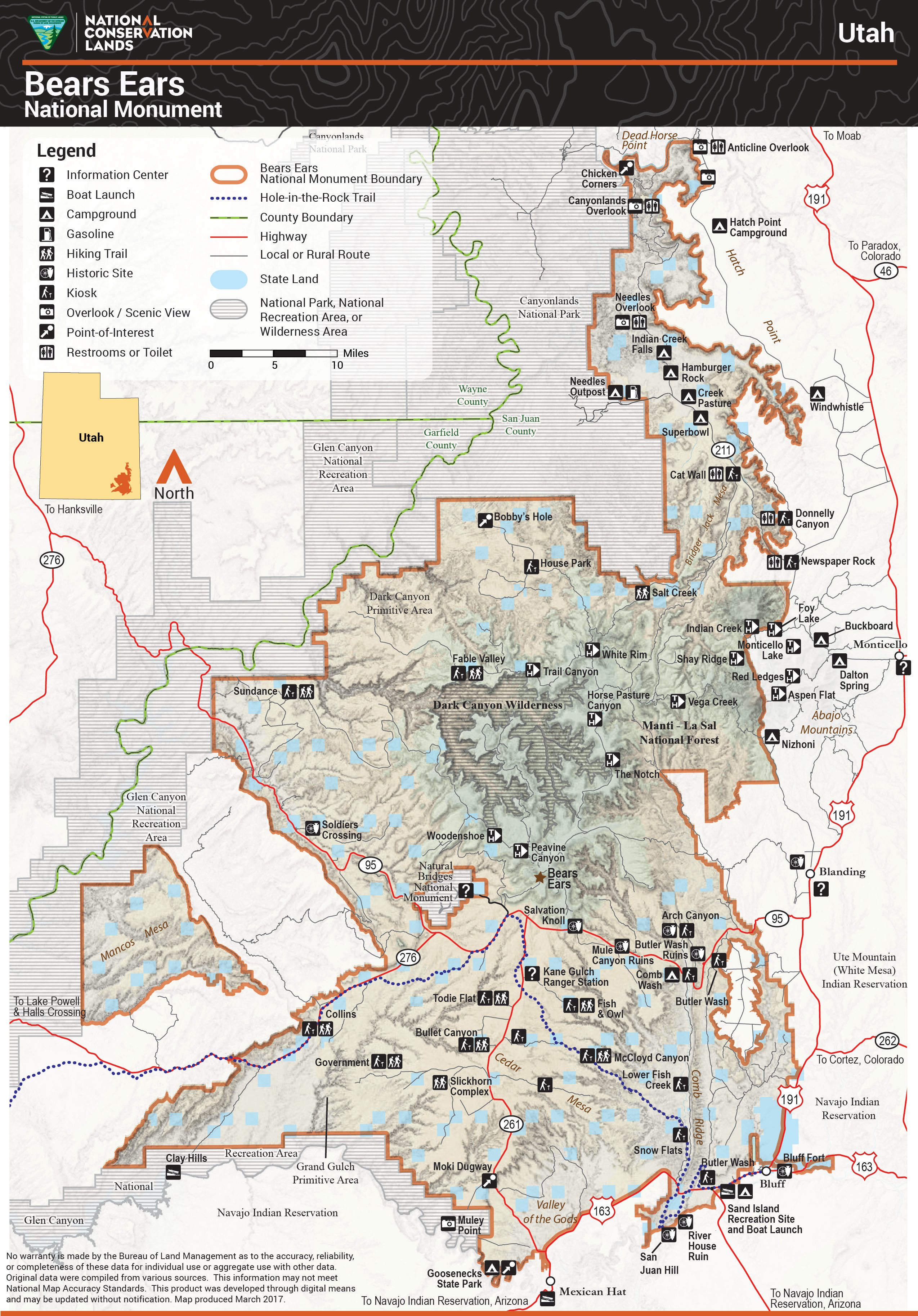 Republicans clearly did not agree. According to an article published in the Atlantic at the time of Obama’s enactment, a group of Republican lawmakers were enraged that this was done by “a lame duck” President. (3) Unsuccessful in getting their own legislation passed to preserve smaller parts of the same area, the Republicans vowed to undo Obama’s legacy.

Approximately one year later, on Dec 4th, 2017, President Donald Trump did exactly that with his own proclamation (#9681). With a stroke of his pen, Trump removed over 1 million acres from the designated Bears Ears National Monument lands, reducing the protection to some 200,000 acres. (4) Trump’s proclamation attempted to justify the modification by claiming that it was not necessary to reserve such a large area to preserve historical sites that are already protected by other statues. Like many of the positions Trump took as President this was not true. The mining claims being staked in those 1.3 million acres had in fact been nullified by becoming part of a National Monument, and Trump’s proclamation reversed that protection.

As a geographer, what I really wanted to see was a map to help me understand the situation. I wanted a visual overview of the completing claims. Then I could ask how the drawing and re-drawing of the Bear’s Ears boundaries related to the management of these lands, as well as the public process by which mining interests can stake a claim. Does it even make sense for private individuals to be claiming prospecting rights in our national forests and wilderness areas? That is another thing I would like to know.

With these questions in mind, I called the National Offices of the Bureau of Land Management and spoke with Christopher McAlear, Assistant Director, Office of National Conservation Lands and Community Partnerships. Mr. McAlear cheerfully explained some of the more general aspects of the situation, and refered me to the webpage where they are documented on the BLM website. (5)

One thing I learned from McAlear, was that re-opening of the lands in question (to both exploration and staking of claims) was true. The Trump proclamation effectively opened up more than 1 million acres to prospecting stakes.

However, McAlear urged me to look at Bear’s Ears in the national context. The BLM manages more than 245 million acres of lands found in 12 Western states, with an additional 700 million acres of subsurface rights over which it has jurisdiction. From this point of view, McAlear told me, the Obama proclamation had protected the equivalent of only 0.5% of the lands that BLM manages.

Sure, context is important, but why downplay the signficance of Bears Ears? Sacred sites are not just numbers in a spreadsheet, they have cultural, religious, and historical significance no matter what size they are. Do you want a wildcat fracking rig at the feet of the Statue of Liberty? Liberty Island is only 1/1000th of 1% of Federal Lands. Is it fair game for exploitation?

As for Bear’s Ears, the same meaning is found in the name for that sacred land in at least four languages. In Hopi it is called Hoon’Naqvut. in Navajo it is known as Shash Jaa’. The Ute Tribe call it Kwiyagatu Nukavachi. While the Pueblo of Zuni refer to this place as Ansh An Lashokdiwe. In each of these languages the words translate as “Bears Ears.” Archeological evidence indicates that human habitations at Bear’s Ears date back from 6,000 to 10,000 years before the common era. Can such a treasured American landscape not be protected? (6)

Let’s get a picture of the actual boundary of the Obama proclamation. An unofficial version of this data was published on ESRI data sharing geonetwork. (7).

With this dataset, we can see the 75% of the area that was originally requested in the petition from the coalition of Native American Nations. More importantly, when the Obama monument boundary is overlayed onto the dataset of all public land claims recorded by the BLM (from 1997 – 2010), (8) we can also see that numerous mineral stakes have been claimed which overlap the area that was protected by the Obama proclamation. The boundary modification that Trump has enacted is seen in the following Dept of Interior map. (9) The BLM also provided the official datasets for these boundary changes on their BLM Navigator website. (A big thank you to all the BLM staff for following up on my request!) 2021 Update: the Trump and Obama files were removed from the blm navigator!

However, I have recreated them from updated layers made available from the Utah BLM website.

The difference in the boundaries can also be compared in the following map. According to the official press release from the Dept of the Interior, the modification of the boundary was made in consultation with the area stakeholders, including the Tribal representatives from the alliance that had originally petitioned President Obama. (10)

In addition to these official pronouncements, we should take into consideration other factors, in particular a more thorough summary of the current mining claims that overlap both the Obama and Trump protected lands.

For example, Daniel Brownstein has an extensive report on Bears Ears that is worth further analysis. (11) In his report, Brownstein points to many mineral deposits, in particular Uranium deposits, as reported in the Washington Post (12). It is worth noting that the Obama encacted boundary also did not include the area of the Daneros Mine Area, which is not contained by the White border shown in the Washington Post map. But the Trump revision, by falling back to the earlier Indian Creek and Shash Jaa National Monuments no longer includes large swathes of potential uranium and oil deposits.

Do these maps reveal potential conflicts of interest between the establishment of National Monuments and mining interests? (13) If not, why has the enlargement of the Bears Ears National Monument protected lands been swiftly reversed?

Perhaps more importantly, if Bears Ears National Monument only represents 0.5% of the BLM managed lands, what is going on in the other 99.5% of those 245 million acres? Does the public have any access to the data, or a right to know how our federally administered lands are being developed?

The BLM is doing a great job of publishing the geographic extents of protected lands. We hope that geographic datasets related to the current claims and leases on those lands will also be made available for further analysis, in order to answer some of the questions we have posed above.